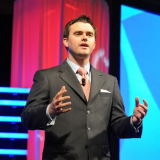 Trey Forgety represents the policy interests of the 9-1-1 community on the Hill and before agencies like the Federal Communications Commission, the National Telecommunications and Information Administration, and the Departments of Transportation and Justice. A recognized expert in public safety policy, Trey’s work is informed by a passion for issues at the intersection of law and technology. Since 2010, Trey has shaped the future of public safety communications with policy wins in contentious fights over wireless location accuracy, text to 9-1-1, and communications network reliability, all while leading the charge to ensure the confidentiality, integrity, and availability of critical public safety systems through new cyber security initiatives. A frequent public speaker and presenter, Trey has represented NENA in both House and Senate hearings in Washington and in less formal venues like the annual DEFCON hacker conference. Trey joined NENA after a pres-tigious Presidential Management Fellow in the Department of Homeland Security (DHS), where he served rotations with NTIA and the FCC. Trey holds a Bachelor of Science in Applied Physics and a Doctor of Jurisprudence, both from the University of Tennessee.

Check out the incredible speaker line-up to see who will be joining Trey.

9:00 AM Inside the “Meet Desai” Attack: Defending Distributed Targets from Distributed Attacks

In October of 2016, a teenage hacker triggered DTDoS attacks against 9-1-1 centers across the United States with five lines of code and a tweet. This talk provides an in-depth look at the attack, and reviews and critiques the latest academic works on TDoS attacks directed at 9-1-1 systems. It then discusses potential mitigation strategies for legacy TDM and future all-IP access networks, as well as disaggregated "over-the-top" originating services and the devices on which both the access network providers and originating service providers rely.