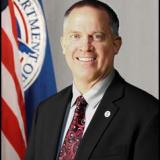 Former Acting Assistant Administrator Transportation Security Administration
Mr. Stephen (Steve) J. Karoly is the Former Acting Assistant Administrator within the Transportation Security Administration’s (TSA) Office of Requirements and Capabilities Analysis (ORCA). In this role, Mr. Karoly served as the principal advisor on matters relating to capabilities and requirements used in all modes of transportation. Mr. Karoly ensured that security technologies and processes were employed to meet the overall mission, vision, goals, and objectives of TSA and the Department of Homeland Security. As the Lead Business Authority, ORCA is the designated organization that has the lead for documenting the business case, translating operational requirements into capabilities, and accepting the capability. ORCA also serves as the project advocate throughout the planning, programming, and budgeting process. As a member of the Senior Executive Service, receiving his career appointment in September 2011, Mr. Karoly brought over 32 years of acquisition and systems engineering experience from both a federal and industry perspective. Prior to accepting his assignment, Mr. Karoly served as the Deputy Assistant Administrator for the Office of Security Capabilities (OSC), overseeing the implementation and development, test and evaluation, acquisition, deployment, and maintenance of all TSA security technologies. Prior to joining TSA in 2014, Mr. Karoly served as Assistant Director for Product Acquisition and Deployment at the Department of Homeland Security’s (DHS) Domestic Nuclear Detection Office (DNDO), where he led a staff of engineers, scientists, and acquisition specialists whose mission was to acquire and deploy radiological and nuclear detection systems for DHS. He also served as DNDO’s acting Component Acquisition Executive, where he was responsible for the implementation, management and oversight of DNDO’s acquisition processes. Prior to joining DNDO, Mr. Karoly served as the Director of Systems Engineering and Chief Systems Engineer at the Office of Technology Innovation and Acquisition, United States Customs and Border Protection, from 2009 to 2012. From 2001 to 2009, Mr. Karoly served in various capacities across Department of Defense programs, to include Deputy Program Manager, Director of Engineering, and Director of Test and Analysis. Concurrently, Mr. Karoly served in the United States Navy (active and reserve), where he retired as a Captain (O6) in October 2014. During his almost 30 years of service as a Surface Warfare Officer, he held numerous leadership positions, including Commanding Officer (5x) and Executive Officer (3x). Mr. Karoly holds an M.S. in Systems Engineering from Johns Hopkins University and a B.S. (with Honors) in Nautical Science/Marine Transportation from the United States Merchant Marine Academy. Mr. Karoly is the recipient of the Office of the Secretary of Defense Medal for Exceptional Civilian Service and numerous military awards and decorations

Check out the incredible speaker line-up to see who will be joining Steve .