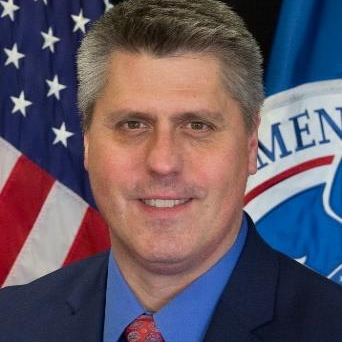 Mr. Doug DeLancey currently serves as the Department of Homeland Security’s Counter-Improvised Explosive Device (C-IED) Strategy, Integration and Communications Branch Chief in the Office for Bombing Prevention (OBP), where he is responsible for the daily operation and success of policy, analysis, and stakeholder outreach efforts. Additionally, he is responsible for the cross-cutting and integrating functions of the Office. He has supported the Office since January 2014 in several capacities, to include leading the first national capabilities-based assessment to determine the required capabilities to counter the threat of terrorist bombings. Doug is a former Army Colonel who graduated from the United States Military Academy at West Point with a Bachelor of Science degree. He was deployed multiple times in Infantry units, to include Operation Desert Storm, Operation Iraqi Freedom, and Operation Enduring Freedom (Afghanistan)—much of that time finding and attacking the networks responsible for employing improvised explosive devices. He served as an Aide-de-Camp, Infantry Platoon Leader, Airborne Long Range Surveillance Detachment and Air Assault Company Commander, Airborne Battalion Operations and Executive Officer, and Infantry Battalion Commander. He also served in assignments at the Pentagon in the Office of the Secretary of Defense, Joint Staff, and Army Staff; and was awarded the Legion of Merit, three Bronze Stars, and an Army Commendation Medal for Valor. He is a graduate of Army Airborne, Air Assault, Jumpmaster, and Ranger School. Doug has Master’s Degrees from the U.S. Army Command and General Staff College and the Central Michigan University, and has completed the Homeland Security Course at the Harvard Kennedy School of Executive Education in Cambridge, MA. He is a Certified Protection Professional (CPP) © and Project Management Professional (PMP) ©. Additionally, he volunteers as a Co-Coordinator for the Community Emergency Response Team (CERT) in Arlington, VA, the Federal Emergency Management Agency (FEMA) Surge Capacity Force which deploys to assist during disasters, and as member of his church’s Virginia Disaster Response Team.

Check out the incredible speaker line-up to see who will be joining Douglas.